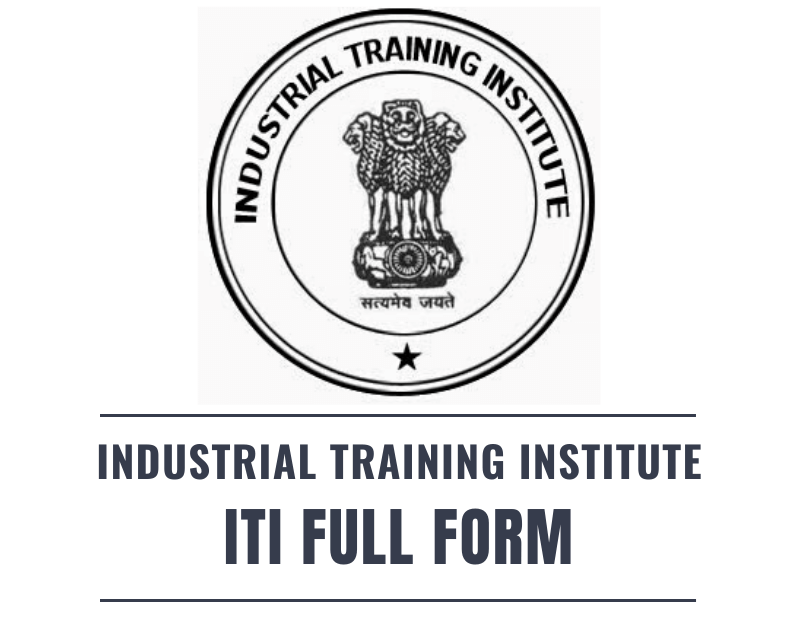 ITI full form? What is the ITI course?

ITI Full form in English: If we speak about the ITI course then ITI is the shortened form of “Industrial Training Institute”.

Update (29th September 2020): Uttar Pradesh ITI result has been declared by the official authority. Candidates can visit the http://www.scvtup.in/hi to check their result.

These institutes constituted under the Directorate General of Training (DGT), Ministry of Skill Development and Entrepreneurship, Union Government to provide training in various trades.

ITI course is designed to provide industrial training to candidates in different trades so that they can help organizations in industrial development growth and deliver through their experience.

The main purpose to establish ITI was to fulfill the needs of trained workers in the fastest-growing Industrial sector by providing skilled labor.

Candidates pursuing ITI course get industrial training also along with their study.

It means if someone doesn’t want to spend too much time in higher studies and just wants to start his career as soon as possible then ITI is the best option for them. ITI course duration ranges from 1 year to 3 years and courses include technical and non-technical courses.

After receiving the NTC certificate candidates can start practicing according to their trades.

Admission in ITI is done based on the guidelines released by NCVT. ITI admission starts every year in April, May, June, July depends on the ITI institute.

Written exam and merit base are the two preferred methods of ITI Admission. Candidates must contact the ITI Institue they want to apply for all details about the admission process.

ITI course fee starts from 1000 Rs and goes up to 10000 Rs. The fee is different for different trades.

The course fee is also different for technical and non-technical courses.

Also if you are pursuing ITI from any private college than you will have to pay some extra money as compared to Government ITI college.

ITI trades (courses) list: As per the recent updated data by the National Council of Vocational Training, Ministry of Skill Development And Entrepreneurship, There are 138 ITI trades in 15,042 ITI Institutes in India ((Craftsmen Training Institute, Directorate General of Training, Accessed on: Sep 14, 2020. [Online]. Available: dgt.gov.in/CTS)). Candidates can check the availability of different trades in the ITI institutes they want to apply. All important ITI Trade list is mentioned below.

Yes, ITI can be done after 8th class, 10th class, and 12th class. It depends on the trades you choose. Some trades can be chosen after class 12th are Stenographer, Physiotherapy Technician, Radiology Technician, Architectural Draughtsmanship, Computer Operator % Programming Assistant (COPA), etc. Click here to know more about ITI trades after the 8th, 10th, and 12th classes.

Which ITI course is best?

How many ITI trade courses are available in India?

There are as many as 130 ITI trades available in India. The availability of trades depends on the institutes you want to apply. Out of 130 trades, around 77 are engineering, 48 are nonengineering and 5 are for visually impaired. We have already mentioned some popular trade list in our article.

ITI or polytechnic, Which is the better option?

ITI is a certificate course and can be completed from 6 months to 2 years. Polytechnic is 3 years duration diploma course. You can apply for ITI after 8th class also but Polytechnic can be done only after 12th class. Candidates having 3 years diploma always get higher salaries than an ITI certificate holder. So Polytechnic is better then ITI.

Is ITI a good course?

Yes, ITI is a good course to start your career early in your life. It also makes you self dependent and you can start your own business as well. There are a lot of trades available and anyone can choose a trade according to their interest.

For the latest Sarkari Exams opportunity check the linked article

Thanks for reading this post. We hope that you found some useful information about the ITI and the full form of ITI here. If you have any doubts or queries, please let us know in the comment box below.

For the latest Sarkari Jobs, please check below links as well: